In order to learn what causes asthma, it is helpful to know how the lungs work normally in order to understand how the airways become blocked (obstructed).

In normal breathing, your diaphragm, which is a large muscle at the bottom of your chest cavity, tightens up (contracts).1 This action makes more space in your chest. Your lungs expand to fill the space, which draws air in through your mouth and nose. To breathe out, your diaphragm relaxes, making the space in your chest smaller. This action forces air out of your lungs. In a person with healthy lungs, the muscles around the airways are relaxed, and air can flow in and out easily.

What is an obstructive lung disease?

In a person with obstructive lung disease, the lungs expand normally and the air usually has no problem traveling into the lungs. The problem starts because the air cannot get out through narrowed airways. It takes longer to breathe out than in.2 Before you have finished exhaling, you feel the need to inhale. When this happens – usually during asthma attacks in people with severe asthma – some air gets stuck in your lungs at the end of the breath. This is called “air trapping.”2 Air trapping makes it hard for the next breath to get in. Once this cycle starts, it becomes harder and harder to breathe.

What makes it hard for air to get out of my lungs?

During an asthma attack, it is hard for air to get out of your lungs because your airways get smaller.3 Your airways are tubes surrounded by muscle. Those muscles contract during an asthma attack and your airways become smaller (Figure 1).4 Less air is able to travel through the tubes, so air starts to build up in the lungs. As a result, you may wheeze, cough, feel short of breath, or feel chest tightness. Some asthma medications help the muscles to relax, and so the airways open up and air can travel out again.4 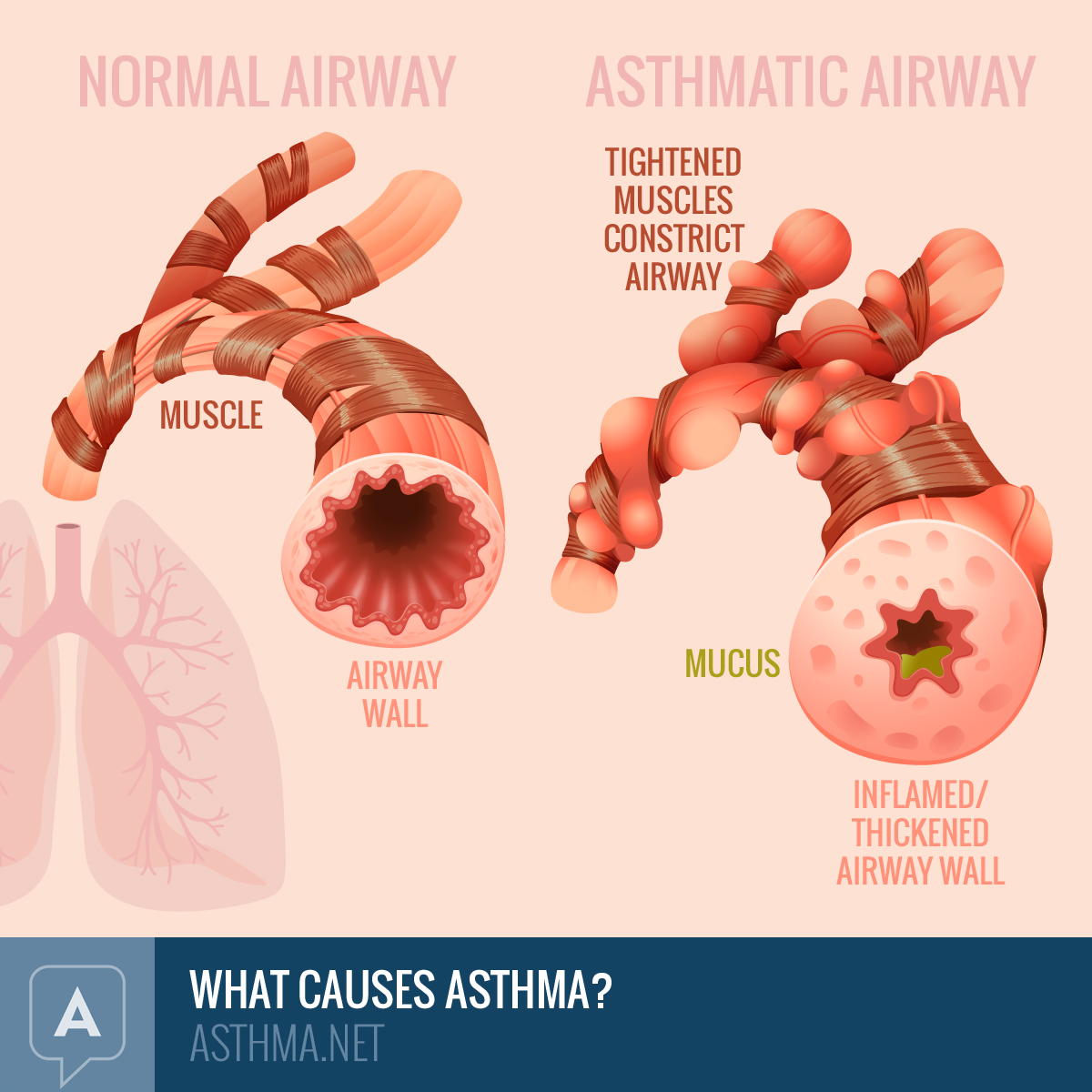 It is possible to feel short of breath even when you are not having an asthma attack. Because of inflammation in your airways, the airways swell and fill with mucus (Figure 1).3,4 The narrowing and blockage of the airways can make it harder for air to get in and out of the lungs. Medications that reduce inflammation also reduce airway swelling.4

In some people with asthma, the muscles around the airways become thicker.3 The layers of cells that line the airway become overgrown. It is not known yet whether these changes are permanent. Currently, there are no medications that can fully reverse this process.

What does reversibility mean?

Reversibility means that lung function improves after taking a medication that opens the airways.5 Reversibility is a sign of asthma. (If the obstruction is not reversible, it is a sign of COPD or chronic obstructive pulmonary disease.)

What is airway inflammation?

Inflammation is the root of the problem in asthma.3 Even when you are not experiencing asthma symptoms, your airways can still be inflamed.6 Inflammation leads to:3

Inflammation makes the airways very sensitive to allergens, mold, chemicals, cold air, and viruses.4 The airways react to these triggers by becoming narrow, which makes it difficult for you to breathe out.3

Inflammation, sensitivity, and obstruction can interact in different ways, meaning that everyone’s asthma is a little different.3 A person with asthma can have some or all of the typical symptoms. Asthma can be mild, moderate, or severe. Certain medications work better for some people than others.

How does inflammation cause asthma airway sensitivity and obstruction?

Many different types of inflammatory cells and signaling chemicals play a role in the cause of asthma. Allergens turn on ‘mast cells’ and ‘dendritic cells’.7 These cells tell ‘Th2 cells’ to send out signaling chemicals called ‘interleukins.’ Interleukins turn on other signals that are responsible for some allergy symptoms, mucus production, airway narrowing, and increasing the number of eosinophils. About half the people with severe asthma have high eosinophils, which are a type of white blood cell.8 Signals from other cells increase the inflammation, making the airways more sensitive. The most important cell types are described in the Table.3,7,9

Medications that block interleukins are under investigation right now.10,11 These medications may be helpful for people with moderate to severe asthma and high eosinophil levels.

How is airway inflammation measured?

How is airway sensitivity measured?

It is possible to measure how sensitive your airways with a methacholine challenge.3 This test rules out conditions that mimic asthma, such as vocal cord dysfunction and other obstructive lung diseases, such as chronic bronchitis and emphysema. Finding out that you have sensitive airways helps to confirm the diagnosis of asthma.

Asthma-COPD Overlap Syndrome: Could Occupation Have an Impact?

Is Your Asthma Causing Lung Sounds?