A Tale of two Flights

I’ve generally had good luck on flying (minus that time I got stuck in Toronto overnight stuck between two airports. When flying back from Halifax in mid-April, I seemed to hit the unlucky “jackpot” for less-than-desirable fellow passengers in my vicinity. So ends my amazing streak, I suppose—I guess it could’ve ended a lot sooner than at like 60 flights in for the decade! One was an asthma problem, one was not.

For the first time ever, I had a young child behind me. He was 2. His dad had purchased him his own seat even though it wasn’t required. He somehow kicked my seat THE ENTIRE FLIGHT despite his presumably tiny toddler legs. I have no idea how he did this. He did also cutely reach forward and grab my hoodie sleeve once through the gap, which maybe some people would have minded but I didn't. The only problem was, he also SCREAMED. For 100+ minutes of a 122-minute flight. Thank goodness for noise-canceling earphones, and the fact that I found a sucker in my bag from dinner one night. Kiddo’s dad was trying SO hard to calm this poor little guy down—he tried to negotiate with the kiddo like a grown up which was hilarious. A passenger came by from another seat to try to mesmerize the boy with something on his phone. The flight attendants tried. I realized I had the sucker in my bag and pulled it out. I had a second in the event it worked. Offering the sucker through the seat gap, Dad took the sucker from me as quickly as I’ve ever seen anyone take something from my hand, with the exception of Guide Dog Murray and Beggin Strips.

I don’t know if the sucker worked or if kiddo cried himself out, but he did calm down for the last bit of flight and landing, which I’m sure Dad was even happier about than I was.

After a perfect-amount-of-time layover at YYZ (on which I did not get stuck in Toronto, thank goodness), I pre-boarded, folded my crutches up and got them settled (half) under the seat in front of me, and plugged my phone in to the IFE system. As my fellow passengers began to board, I was content to discover I did not have chatty seat-mates. Sometimes they can be fun (like the lady made me hold her giant hat, told me to blog about her and what she wanted her pseudonym to be!), sometimes I’m just not feelin’ it. Then the lady behind me slid into her seat. And began coughing.And sneezing. And sniffling. And coughing.People, this woman ordered chicken noodle soup on the plane, that was her level of illness. Now, I was actually traveling with a new mask in my bag. And with my next trip one week and six hours later, my goodness, I was not opposed to looking like a dork to possibly prevent myself from acquiring plane-lady’s illness. Even if these particular masks aren’t advertised as germ filtering, it was sure as heck better than nothing. 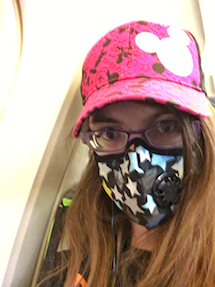 Upon landing, I booked it off the plane and to the bathroom to wash my hands. (I’ve been home for four days now and—touch wood—not sick yet.)

Flying as prepared as possible.

I’ve gotten really lucky with my plane seat-mates and those in my vicinity for the most part. I do my best to fly prepared—I had hand wipes in my bag; I had the mask—and actually wore it—knowing I didn’t have time to get sick. Apparently this particular Tuesday was just a rough go. (Given other events of the week, it just wasn’t quite my week!)

Though, given I also got stuck in Toronto three Tuesdays prior, maybe I should just bar myself from flying on Tuesdays. Or through Toronto on Tuesdays. ;) Hopefully things shape up for my Wednesday departure and 7 flights in that 15-day span!

Iron Deficiency Anemia and Asthma: Is There a Link?

"I Have Asthma, Can I Still Have A Dog?"

16 comments
This article represents the opinions, thoughts, and experiences of the author; none of this content has been paid for by any advertiser. The Asthma.net team does not recommend or endorse any products or treatments discussed herein. Learn more about how we maintain editorial integrity here.