After eleven years of asthma and year-round allergic rhinitis, with data from my personal air quality monitoring device, I opted to buy an air purifier. When I asked my asthma specialist about them many years ago, her response was the eloquent verbal equivalent of a shrug.

In Part 1 in this mini-series on air purifiers, I looked at the very basics of what air purifiers are supposed to do and dug into the research on purifiers and asthma. I found that the evidence is mixed—which made my respirologist’s reaction make a lot of sense! In this article, I’ll share my own experiences and experiments. Keep in mind, of course, your experience may vary.

Have I noticed a difference in my asthma and allergic rhinitis symptoms?

First, the anecdotal: Have I noticed a difference in my asthma and allergic rhinitis symptoms?

It’s hard to say. I feel my allergic rhinitis, specifically, is much the same, but I also realize that is not going to improve as much as it could given my irregularity using my nasal steroid (I keep trying. I have no idea why this is so problematic for me, I take everything else properly!). With that said, though, I am generally somewhat oblivious to my sinus symptoms unless they are particularly annoying, I guess?

It’s also possible that, of course, with a gradual improvement I just don’t notice as much, either. When I started writing this two days ago my sinuses were more congested, but today they feel a bit less so. This likely has nothing to do with the air purifier… but, well, it might!

With regard to my asthma, I don’t feel as if I’ve had considerable improvement by using an air purifier. However, given my waking hours are spent in a different room from my air purifier, it would be interesting to see if I noticed a difference had I been in the vicinity of the air purifier during my waking hours, too. Perhaps an experiment to try in the future! 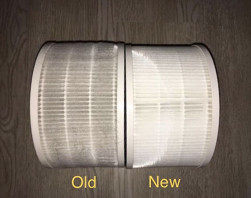 In July, 7.5 months after I started using my air purifier, the indicator light to change the filter began blinking. I ordered a new filter and received it 3 days later. Now, initially upon removing the filter, I didn’t see much difference… well, that was until I held the old filter up to the new filter! Given the air purifier is sucking in stuff that we can’t generally see with our own eyes floating around in the air… well, I guess it’s doing something?

And finally, the Atmotube Air Quality Monitor test. The Atmotube is a small wearable device that monitors the air quality around you (see my disclosure at the end of this article). The device continuously monitors air quality wherever you are (well, except since we are currently having a pandemic and I am really going nowhere, it generally lives in my room).

Here’s the snapshot from when I first got my air purifier and left my monitor in the room with it: 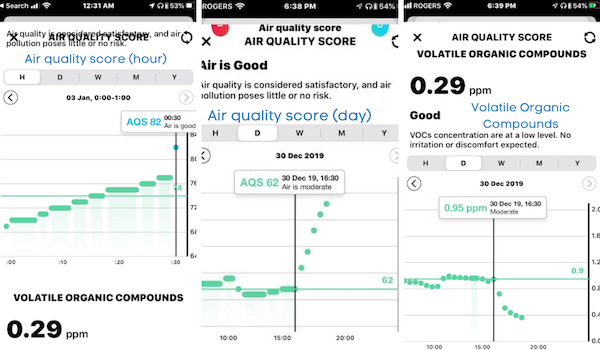 You can see that the air quality score rising, and the particulate matter dropping, despite that the levels ranked as good to begin with. For reference, the colors go from red to yellow to green, topping up with blue for excellent air quality. My home air quality before getting the air purifier was generally quite good - but it is certainly possible to make a good thing better.

Really, I don’t know for sure. Anecdotally, I feel like the air in my room is “fresher" with the air purifier running, but is that just because the air is getting forced to move around a bit more. Would I have a similar experience by opening a window? It’s possible. If I had more significant allergy symptoms on an ongoing basis (or hadn’t become so indifferent towards my rhinitis) maybe I’d notice more. Maybe if I spent all day in the room with the air purifier, rather than just when I’m asleep, I’d notice too.

In the previous article, the research didn’t really stack up too convincingly either way, either. So, in summary: Your air purifier mileage may vary.

Do you use an air purifier for your asthma and/or allergies? Why or why not? Let me know about your experiences in the comments!

Disclosure: I received the Atmotube free from the manufacturer for purposes of honest review on my blog back in October 2019. They did not ask me to write about it here, nor do they even know I am writing this piece.

Have you experienced a collapsed lung?