Asthma and My Allergic Reaction to a Bug Bite

Bugs generally like me, which is unfortunate because I don’t really enjoy them. I also seem to have (comparatively) overzealous reactions to even things like mosquito bites, compared to the rest of my family, as my aunt commented the other day. This has been a long-time thing, even though I have been having more skin reactions to things within the last year, though nothing I’ve found too troublesome.

On June 30th, however, I was minding my own business and had just finished enjoying a barbecued pizza when I glanced down at my knee to see this… I don’t even know what.

What the heck is THAT? 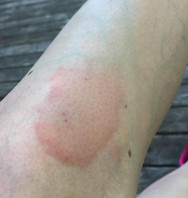 Now, I said I’ve been having more skin reactions lately but this one was different. Now, the small patch that developed just under my knee at first looked sort of like when you kneel against something for a bit and then stand up. Just a nice little 1.5 by 1.5 inch red blotch (okay they’re usually a bit rounder if you’re leaning on something!). Only issue is it was itchy.

Because it looked suspect I popped an antihistamine and continued on my merry way.

Well… Until I glanced down again at it 2.5 hours later and it looked like THIS: 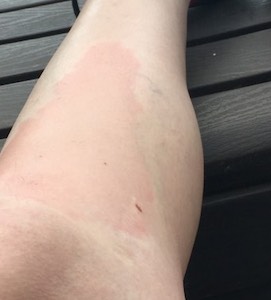 Um, excuse me leg, what are you DOING? (To cease any [further] alarm, there are 2 scars down either side of my knee; those are not some weirdo bug bites.) It’s not like I was even wandering anywhere close to the bush this weekend, either!

And then, because the bandwidth on the cell tower by the cabin is overstretched AND it was Canada Day, I had to live like it was 2000 as my dozens of google searches went unanswered, because I couldn’t get anything to load, nor would my text to the wife of my doctor friend go through! Sheesh, how did people make medical decisions back in the day?

Mysteries of… whatever this thing is

Well, being able to gather very little additional information beyond page 1 of Google, this, of course, seemed something not worth going to a small town hospital over. Well, not yet anyways. We reverted to basic first aid, in which I had already taken an antihistamine, had no hydrocortisone with me because my mom took it once and never put it back in my medicine bag, had no Benadryl with me (note to self: buy new Benadryl), so all I had left in my brain was ice and elevation.

Oh, I also sprayed it with a steroid inhaler but that is 100% not recommended and definitely an off-label use that probably did nothing. I also very very briefly debated mushing up a prednisone in moisturizer to put on there, but I decided that was ridiculous.

For a brief time after I started applying ice, this thing continued to spread (yes, it kept going from the picture)! Fortunately, it started getting better by the time I went to bed, which was six hours after the whole debacle started. It was also later discovered I had a small similar-looking patch on the back of my other leg! What on EARTH?!

Consulting the “experts” (No, not a doctor)

Today, upon getting home, I finally texted Dia about this mystery thing. In case you were unaware, which you likely were, Dia used to be a camp counselor, so while not the camp nurse she is somewhat reasonably qualified to comment on things of an outdoorsy nature (yes, I was wishing the provincial park had a camp nurse I could go see!).

Her response was “holy crap!” followed by “I would say spider-ish”, in response to my question of what bit me? She also felt like this seemed a bit abnormal for a usual spider bite but, hey, neither of us are doctors!

Asthma and a bug bite allergy

Since writing this, I happened to see my doctor. I still have no idea what bit me — neither did she, given she is a doctor and not a naturalist or whatever. She, too, said it looked like an allergic reaction, potentially to a bug bite. Either way, lesson learned and I’m now properly stocked up on Benadryl and Benadryl spray (given I could not find hydrocortisone at the one store I was going to that day!)… just in case.

So, normal spider reaction or allergy or both? I may never know! However, did you know a risk factor for spider bites is living in an area where there are spiders? This is indeed a fun fact I texted Dia — thanks, MayoClinic.org, I’d have never guessed.

My Asthma Action Plan Is... In My Head?

23 comments
This article represents the opinions, thoughts, and experiences of the author; none of this content has been paid for by any advertiser. The Asthma.net team does not recommend or endorse any products or treatments discussed herein. Learn more about how we maintain editorial integrity here.

Please read our rules before commenting.

Have you taken our In America survey yet?