Be Aware Of The Harrowing Halloween Trigger: Dust Mites!

Halloween has always been one of my favorite holidays. It also brings back some of my most frightful asthma memories. I think I spent more time in emergency rooms for asthma on Halloween nights as a kid than trick-or-treating. In retrospect, I think it all could have been prevented if I was only aware of the harrowing Halloween trigger that is DUST MITES.

Mom was very frugal. Rather than buying brand new Halloween costumes every year, she kept a trunk full of old costumes, and old clothes and uniforms, in the basement. Every year, a day or two before Halloween, you’d find me down there rummaging through this trunk. And the sniffles and sneezes and wheezes would soon hit, and ruin my fun.

Sometimes I would actually make it to Halloween night. I would feel good, ready to get lots of candy. As we set out, I would put my mask on for the first time. When I was a kid, we never had candy during the year. So, Halloween was a special treat. My brothers and I would literally run from house to house, and sometimes we’d get huge hauls. 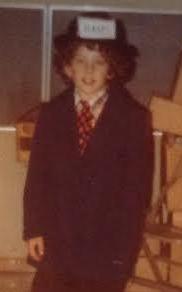 My grandma helped me  put together this costume from items around her home in 1980. She turned me into Harpo Marx. Grandma was so excited about her creation she came to my classroom and took this picture.

Yet one year, as my brothers kept going, I stayed back. “Come on, John!” my older brother Bobby yelled. David, who was a year younger than me, kept up with Bobby. By the end of the night they had huge hauls of candy, and they were making fun of me for not getting as much. I knew darn well they were not going to share.

The dust triggered my asthma

But none of that really mattered at the moment, as my chest was tight, and my breathing was short. Later that night mom took me to the emergency room, and I eventually admitted. It was, at no point that I remember, acknowledged as to what triggered my asthma that night.

In retrospect, I know what the culprit was: DUST MITES! Those pesky little critters are essentially microscopic (unseen with the naked eye). They love flakes of skin, and there were plenty of flakes of skin on those old clothes in that trunk. They ate and ate and they spread and spread. There were probably millions of them by the time I opened that trunk. 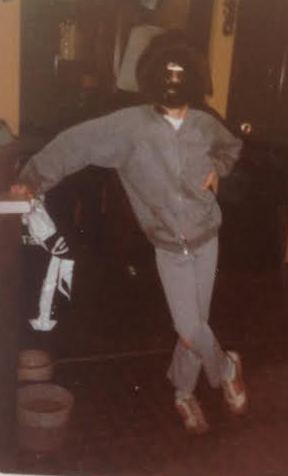 In 1981, I got this bright idea I’d make an old man costume from an old wig. Well, that didn’t turn out so well, as I ended up in the ER. Even though I look cool in this picture, I was probably already short of breath.

There were even some on that mask. And when I inhaled after putting it over my face, I was also inhaling dust mites. But it wasn’t even the dust mites that were causing my grief: it was their feces, which are easily aerosolized and inhaled deep into airways.

There, my immune system confused them for harmful pathogens and initiated an all out onslaught to trap, kill, and expectorate them from my body. But, because they were not pathogens, this abnormal immune response merely caused sniffles, sneezes, chest tightness, and wheezes. They ruined my Halloween fun.

I ended up opting out of Halloween

I do not fault my parents: they didn’t know any better than I did. Sure they were adults, but how were they to know about harrowing dust mites. I mean, for crying out loud, when they were kids they did the same thing, and they never had trouble breathing as a result. So, there is no faulting my parents here.

It did, however, retire from Halloween long before my brothers did. Of course, sometimes we asthmatics forget we have asthma. About twelve years later, now in my early 20s, I attended a Halloween party, and found the perfect costume in mom’s trunk. No one knew who I was until the asthma struck and I was forced to pull off my mask and take puffs on my rescue inhaler. I ended up in the emergency room that night.

Stupid me, the same thing happened the following year, and that year after that. Fool me once, fool me twice, fool me three times… okay, I get the picture. I can figure out when Halloween doesn’t want me to have fun. So, once again, I retired from Halloween, and this time for good.

Learn from my mistakes

Okay, so, my point here is not to tell sob stories about my asthma past. I don’t like to relish on the past anyway, and I’m not going to do it here for no reason. My point is to make sure you are aware of dust mites as a potential Halloween trigger. They are invisible, but they are there and they can ruin yours or your child’s Halloween.

So, what can we learn from my harrowing Halloween experience?  Well, if you have asthma, or if your child has asthma, you can still enjoy Halloween. Just make sure you buy new every year. Don’t be wearing costumes that have been stored. Okay? That’s the simplest answer here. New “usually” means no dust mites.

Now, I understand costumes cost money. If you must wear an old costume, if your child is excited about that pirate costume in that trunk in your basement, make sure you wash it before your child wears it. The good thing about dust mites is they die easily. So, wash the clothes, wash out the masks, and you’ll be fine.

So, I was actually thinking of coming out of retirement this year. I’m not going to a party or anything, but I do take my kids trick-or-treating. I might do it this year. If I do, I will be sure to heed the same advice I just gave you. So, don’t let the dust mites bug you! And have a Happy Halloween.