Through a Different Lens: Watching the Minute-By-Minute Unfoldings of Chronic Disease.

I write from a lens of living with asthma and ADHD. I have friends with other chronic diseases whose stories I know, people I try to understand and empathize with to the best of my ability, but I know I can never be in their shoes, and I know I can never understand the daily ups and downs of their disease.

Continuous monitoring of a condition

A friend with type 2 diabetes who uses insulin, recently got a Dexcom continuous glucose monitor (CGM), and the night he powered it up, he asked if I’d like to “follow” him. The Dexcom CGM sensor measures his blood glucose via interstitial fluid every 5 minutes and transmits it to a receiver and to his iPhone. Then, by magic of the internet and Dexcom Share, his blood glucose shows up on my iPhone and Apple Watch. The app sends alerts if his readings move outside of a preset threshold (which I can adjust). This allows me to shoot him a text if I’m alerted to an “Urgent Low” blood sugar, making sure he’s okay and responding to the alarm (the sound of which I call “the submarine going down”, by the way!)He lives in Oregon, and while his family is also connected on Share, here I am 2,385 kilometers away, connected to that same data. It’s pretty cool. 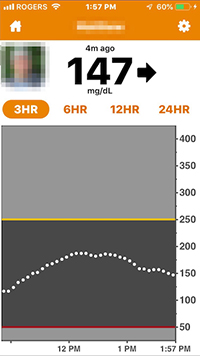 The main screen on Dexcom Follow, where I can see my friend’s blood glucose data from a whole other country. 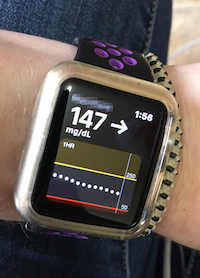 That same screen on my Apple Watch. The arrow indicates if glucose is stable, rising slowly or rapidly, or falling rapidly.

The cognitive demands of a chronic illness

I’ve been following along with his glucose data for a week now, but when I began writing this less than 12 hours in, I already felt a much better appreciation for the intense cognitive demands of diabetes—not to mention the work that has to be put in. I’ve seen snapshots, CGM graphs friends have posted on social media, and just the thoughts I have entertained over the first 12 hours and the last week about my friend’s BG data, my brain responding to it in “real time”, even though there’s nothing I can physically do.

A high glucose alert which popped up while I was in the Dexcom Follow app.. 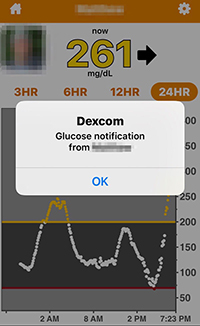 From the Dexcom data and alerts, I’ve gained a much better sense of the cognitive burden of diabetes. For now, it’s new—soon, I’m sure, I won’t be flipping over to see his graph as frequently as I am now, but rather allowing the alarms to do their job—for him, and if needed, for me to check in. Of course, I don’t text him every time the dots veer up and down, but I’ve sent him a few props and screenshots when the graph on my end has been particularly smooth. Chronic diseases, like diabetes and asthma, are hard work, and we don’t get near enough props for the work we put in!

How could I better visualize my asthma?

Being able to see my friend’s Dexcom Share data makes me want to be able to provide a better daily visualization of my asthma. I can now see the intricacies of my friend’s diabetes in real time. How do we do this for asthma? The reality is we can’t—yet. I sent screenshots to Nick at Strados and Dia—I told Nick I want to be able to “spy on Dia’s lungs”, Dia told him she needs a buddy and “compliance officer”. Most people probably wouldn’t want this—I do. I want this crazy, high level of technology to benefit me, and to be able to share my data in a fancy visualization that automatically generates itself from my lungs.

Right now, I have Dexcom Follow alarms set closer to my friend’s alert settings, to better understand the barrage of data as my wrist vibrates the moment his blood sugar trends above 200 mg/dl or below 70 mg/dl. Eventually, I’ll reset the parameters to only inform me of urgent lows under 50 mg/dl. I can disable the alerts, “turning off” the empathy-building experience of a greater understanding of the literal ups and downs of diabetes. I can’t turn off my asthma—nor what I learned from watching the many moves of the Dexcom data. One day, I may be able to visualize my asthma this way—and give someone else that same experience my friend has given me to have a better chance to grasp understanding the complexities of a chronic disease I’m fortunate to not live with.

Iron Deficiency Anemia and Asthma: Is There a Link?

2 comments
This article represents the opinions, thoughts, and experiences of the author; none of this content has been paid for by any advertiser. The Asthma.net team does not recommend or endorse any products or treatments discussed herein. Learn more about how we maintain editorial integrity here.