Coffee and Asthma: What's the Deal?

I’m sure some heavenly choirs have erupted in a few readers’ brains.

And some of you may be thinking...

I’m from Canada — and yes, most Tim Horton’s stereotypes abounding are pretty accurate. I mean… This picture of a Zamboni going through a drive-thru at Tim’s exists. 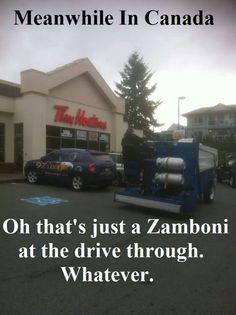 Opinions on Tim’s coffee are mixed… But, just about everyone has an opinion. Tim Horton’s and Canada are just kinds of synonymous, to the point I’ve seen a Tim Horton’s ad “Welcome Home” sign in an airport or two (or three or four…). Just thought I’d get that out there when we’re talking coffee — love it, feel indifferent to it, or hate it, yes, it’s pretty much all true. (Thanks for allowing me that digression).

The good things you’ve heard are true. Caffeine has been studied by several different research teams regarding its effects as a bronchodilator — that is, a substance that dilates, or widens your bronchial passages, the small tubes in your lungs that clamp up and get even narrower when you have asthma symptoms.

A review of the current literature on caffeine’s effects on asthma — published in 2010 and reviewing seven trials involving over 75 people with mild-to-moderate asthma. It is noted that caffeine, found in the world's favorite morning wake-up beverage coffee, can have a “modest” positive effect on lung function for about four hours — in even small amounts.1,2

This is important, as it can have a helpful effect on alleviating symptoms, but also in that caffeine should be avoided prior to any lung function (spirometry) tests for at least four hours to provide the most accurate results. However, it — so far — appears that exhaled nitric oxide tests, also known as FeNO (or “fractional exhaled nitric oxide,” a marker of inflammation in the lungs), are likely not affected by caffeine. This needs more research.2

The same review also notes that studies are limited and that it is possible that with large amounts needed to control asthma symptoms, the undesirable effects of caffeine — referred to in this case as a drug — would pose an issue.2

The knowledge on caffeine’s effects on asthma have been longstanding. In 1993, the Harvard University Crimson published an article on caffeine and asthma. In this study — which is over two decades old — it was noted that people who drink coffee and asthma reported 33% fewer symptoms of asthma than those who did not drink coffee.2 Coffee was, even then, thought to relax the muscles surrounding the airways that tighten up during an asthma flare.3 In fact… our resident respiratory therapist and asthma historian, John, notes on his blog, Hardluck Asthma, that in 1807 a physician was already recommending coffee for asthma!4

What about caffeinated beverages other than coffee?

For similar reasons, tea is also noted to have a similar effect.1 However, even the article from 1993 notes that caffeinated sodas and teas do not have the same bronchodilator effect as coffee seems to.3 CaffeineInformer lists a cup (8 oz) of brewed coffee (I opted for a generic brewed coffee stat) contains a “very high” amount of caffeine, at 163 mg per cup.5 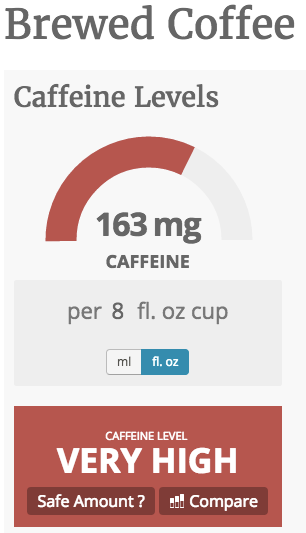 Conversely, a generic black tea contains a “moderate” amount of caffeine, clocking in at 42 mg (half that, approximately, for green tea).

(Note: the “safe amount” button will take you to a calculator to determine how much of your favorite caffeinated beverage you can consume a day without ill effects — not that they necessarily recommend that! — and what amount would kill you? More fun facts for your day can be found at Caffeine Informer!3) 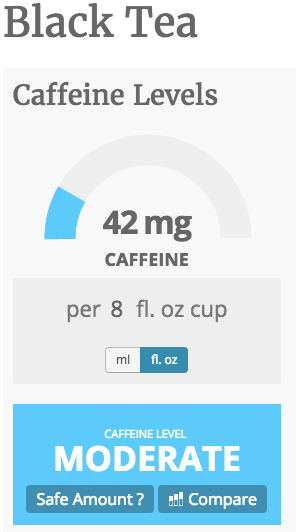 Tea, conversely, only has 42 mg of caffeine per cup… over three times LESS than a cup of coffee.

Caffeinated sodas vary widely, but seem to average between 1.8 and 4.5 mg per fluid ounce based on the most commonly consumed sodas.5 This works out to 14.4 to 36 mg of caffeine per cup — which explains why, even per the hypotheses from 1993, carbonated, caffeinated sodas don’t produce the same effect as coffee on asthma.

Other than high caffeine content… what’s so special about coffee?

(…Don’t let the die-hards hear that one!)

Coffee is very similar to theophylline3, a drug that John wrote about in the post I mentioned earlier.4 While no longer commonly used in asthma treatment, theophylline is a bronchodilator, and very closely related caffeine as found in products like coffee and tea. Theophylline relaxes the airways, by way of relaxing the muscles that wrap around the airways that begin to “clamp down” when asthma symptoms are experienced.3 So, why is this? It appears that when the liver breaks down caffeine, one — very small — byproduct is theophylline.6

Now, for emphasis: very small amounts of theophylline. So yes, it’s true that coffee — or in greater amounts, tea — can help your asthma symptoms… but, it’s far more effective (and more spill-proof) to carry your rescue inhaler. If you’re caught in a lurch and have relatively mild symptoms and no inhaler, a cup of strong, black coffee might help (as its caffeine content, as we have discussed, is much higher than tea). But don’t rely on coffee to make your asthma better in the long-term. If your breathing is getting worse, it’s safer to visit a doctor or emergency room rather than drinking a bunch of coffee!

My experience with coffee and asthma

I personally consume a very small amount of caffeine. We're talking about the amounts found in chocolate, decaffeinated coffee-based beverages from Starbucks, and maybe a caffeinated soda on rare occasions. Aside from soda, which I really don’t enjoy that much, this is due to the combination of my asthma meds having minimal effect on my heart rate, my stimulant meds for ADHD having a minimal to moderate effect on my heart rate, and a crazy tachycardic [high heart rate] experience or two when I combined caffeine and my ADHD medication early on.

Therefore, I can’t vouch for the effects of larger amounts of caffeine, such as in coffee on my asthma, at least not in the past three years! I did note mild positive benefit from it before that, but I’ve never relied solely on coffee to manage symptoms — a situation that should surely be avoided!

What are your experiences with coffee, or other caffeinated beverages, and your breathing?

I Could Have Told You That: On Secondhand E-Cigarettes/Vaping Exposure and Asthma

22 comments
This article represents the opinions, thoughts, and experiences of the author; none of this content has been paid for by any advertiser. The Asthma.net team does not recommend or endorse any products or treatments discussed herein. Learn more about how we maintain editorial integrity here.