Few things seem to accumulate faster than old inhalers. They count off months like a calendar, except they’re more bulky, don’t all function in intervals of 28 to 31 days, and are harder to get rid of.

Due to my general inability to be organized, old inhalers tend to pile up—on the shelf by my bed, in a drawer, and in a basket—and do not get me started on the freaking caps! Eventually, I’ll do a sweep through all the places these inhalers end up accumulating and end up with a whole bunch of inhalers—like several dozen—to get rid of. I used to recycle the actuator—blacking out or peeling off the label—and throw out the pressurized canister, and while more convenient, I realized this possibly wasn’t the best way to get rid of old inhalers given the risk of exploding pressurized canisters!

Getting rid of old inhalers and other medications 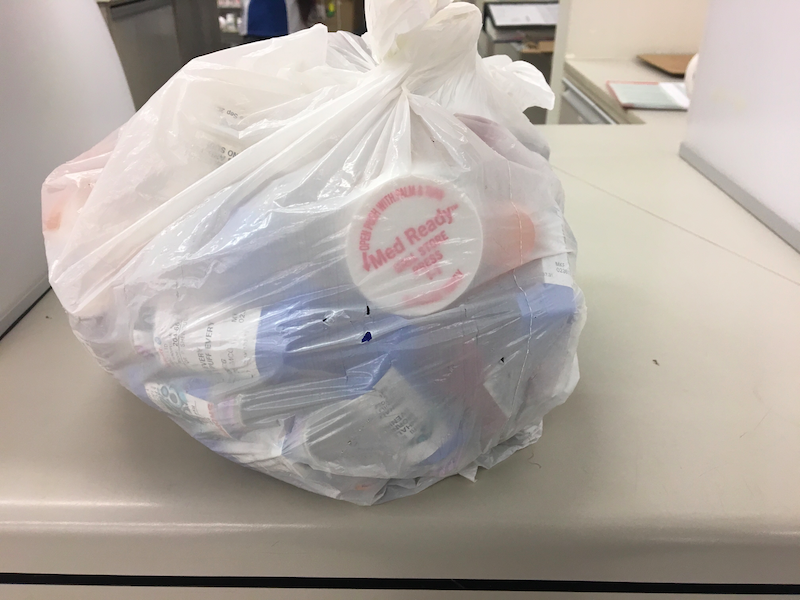 Here in Canada, every pharmacy has a medication “take-back” program1, in the United States, you can locate your nearest public disposal location for controlled substances, or ask your pharmacist—many pharmacies in the US also have ways to dispose of unused or expired medications.2 I dropped off a ton of inhalers, as well as some medications I was no longer taking there today. The only way it could have been quicker and easier is if I had taken them last week when I had new prescriptions to pick up!

The US and Canada have different, though similar, recommendations for disposal of old medications at home. In both countries, it is recommended to dispose of most pills/tablets/capsules in household garbage by mixing them in a sealable container with an “unpalatable substance” to humans and animals—these include used coffee grounds, kitty litter, or dirt.1,2

In the United States, medications may be labeled to be flushed down the toilet or sink when no longer being used to protect others from immediately dangerous substances such as pain relief patches (ie. Fentanyl) or other drugs. These drugs will be labeled for disposal as such, otherwise, they should go into the garbage whenever possible.2

Canada – Disposal of medications in sewage

The Government of Canada recommends never to flush old medications into the sewage system, to minimize environmental risks associated with this practice, as water treatment plants are not equipped to deal with pharmaceuticals.1,3

Medication disposal and the environment

While the overall risk is low2, as are concentrations of pharmaceuticals currently in the environment1, they may still have effects on human and environment health.1

Over time, pharmaceuticals may accumulate in the environment—soil and water—and have a greater impact on the health of people, animals and the planet.1 If you have a medication disposal facility available… please use it!

One question I couldn’t answer was what happens to medications after they’re properly disposed of by patients. I’m doing some investigation, and hopefully will have more to share on that subject, because I think it could be quite interesting!
Especially when you figure in the explosion-y nature of inhaler canisters.

How do you get rid of your old medications?