Duct tape is fun. I have a passport wallet made of duct tape, and abandoned a backpack I was making with duct tape, and last week made bug wings out of duct tape so I could make bugs with the boys at work, but they were not interested so I just made bugs by myself. Whatever, children. As such, I have a dozen rolls of different colours and patterns around, and somtimes I decorate my inhalers with it because WHY NOT.
I haven’t forged my way into (m)any asthmaDIYs because, really, what is there to DIY? Except, perhaps, an inhaler clip based on that thing I saw on Etsy (and another idea I will share if it is successful, because come on, I put enough of my failures on the internet, thanks!)

Stuff you will need 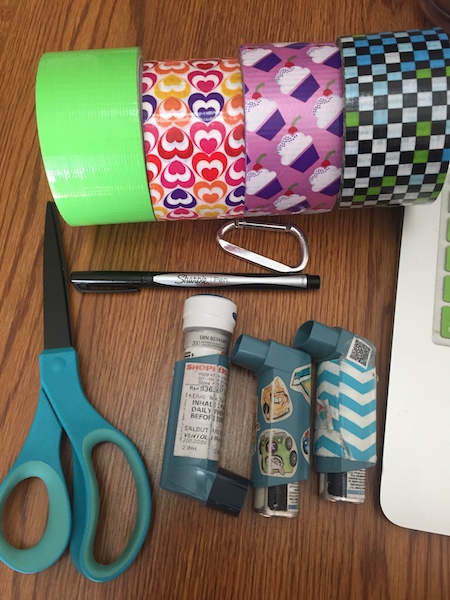 *A note on scissors: In the past I made a weighted blanket out of duct tape (several rolls!), which got my not-non-stick scissors super gunky. Depending on your tape, and how much cutting you do, this may or may not happen. If you are using regular scissors and they get gunky,  find WetOnes are REALLY helpful to de-gunk the blades when cutting tape. I presume a damp paper towel with a blob of soap could also do the trick? Look, if you’re going to the store to pick up WetOnes for $4, and you think you’ll cut tape ever again, spend the $8 on non-stick scissors. As I rediscovered halfway through this project when I accidentally was using other scissors, they are MUCH less hassle.

If desired, since you’ve got the tape out, decorate your inhalers. One of mine had restaurant stickers on it from a time I went out with my friends and we got kids colouring packs at Olive Garden, yes we were 25, thank you. They’re all faded and were not nice anyways so I covered ‘em up. And no, I have zero idea where my inhaler caps go. 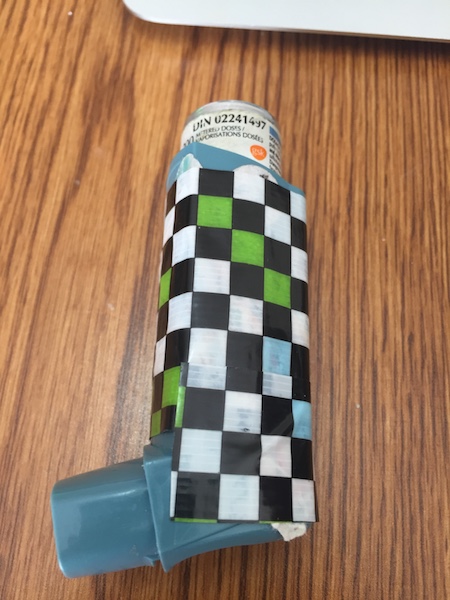 The fundamental “skill" involved in most duct tape crafting is making “sheets”. This is the only reason I can make duct tape things—it is easy. We’re even going to tone that down today, because we’re going to make strips.

Take the tape still on the roll and wrap it shiny side out (non-sticky side) around your inhaler to get the size. Cut about an inch extra off. Now simply fold it in half lengthwise, sticky sides together. If it’s not even, you can trim it, no worries. 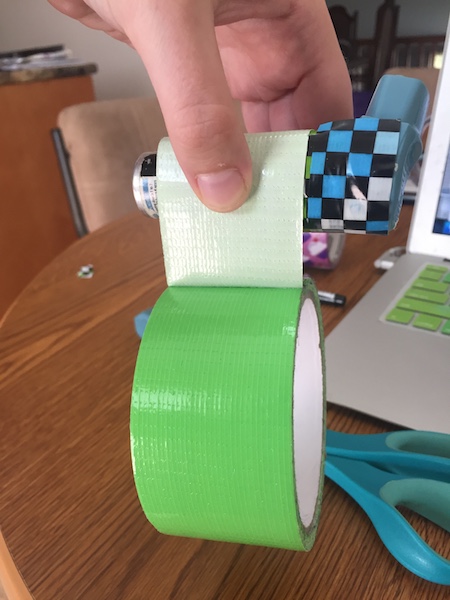 Wrap it around the middle-ish of your inhaler, I didn’t do mine too snugly, then use another small piece of tape to loop it together.
By the way, the higher-ish up this loop is, the “better”, in my opinion, the inhaler will hang. This may take some adjusting, but by the time I got to the third one I was making these in about two minutes. 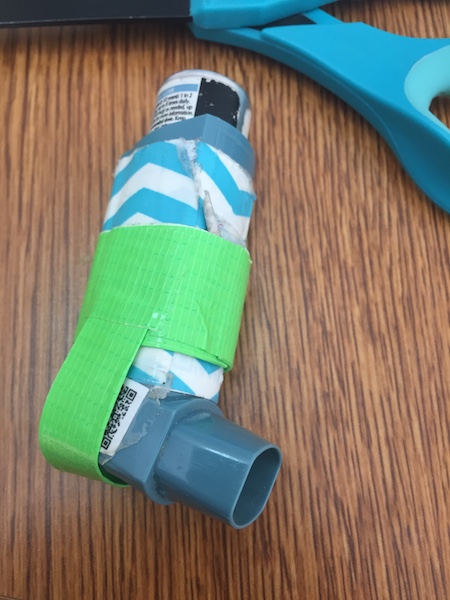 Also known as the loop. You probably know what’s coming, fold yet another piece of tape in half, and make a non-sticky strip—I trimmed mine down to be roughly the same width as the back side of my puffer, if you’re using a key ring or something, you may want to make this even slimmer. Now, make a loop that your carabiner or clip will slide through easily, and tape down the folded over side.
Trim to size, and simply tape this to the bit already stuck to your inhaler. Keep in mind, the lower down you can secure it, the more stable it will feel because of the layers of duct tape, and the less it’ll flop around. 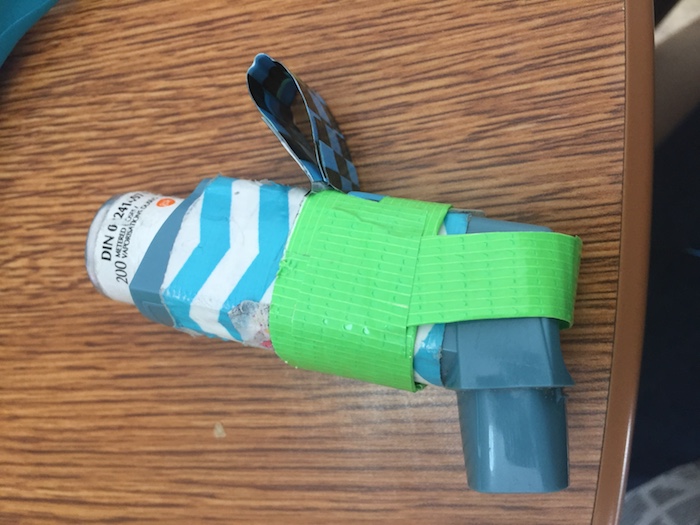 Note that because gravity, it’s likely better to put the loop on the front of your inhaler than the back to keep the inhaler less angled. (I did the back the first time) It really doesn’t matter, though. This will also take some experimenting. If you don’t press down the tape too hard you should be able to adjust quickly! 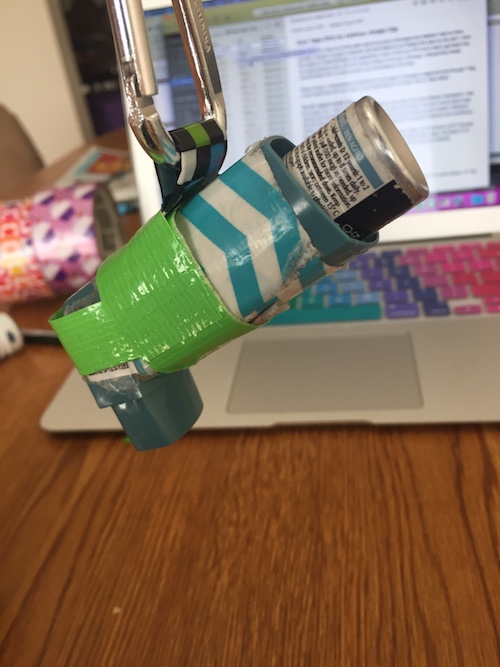 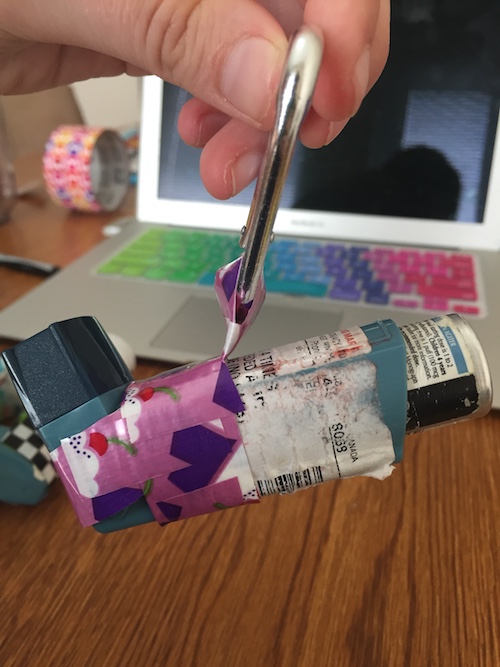 For my inhaler I use most regularly with the Propeller sensor, I actually have to hang it upside down for it to not be super horizontal! 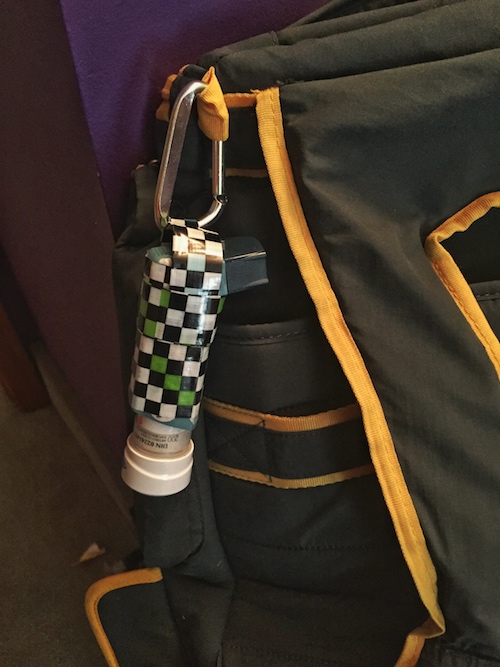 Now, give the tape assembly a tug from as many angles as you can. I pulled from the bottom to see if I could actually slide it off and my tape began coming apart, so reinforcements may be necessary! Note as well, that I was not able to slide mine off because duct tape does not stretch! If you want to switch inhalers, it’ll be a matter of cutting the bottom loop open, and then re-securing it to a new inhaler. No big deal, it’s duct tape!

Slide your carabiner or key ring or whatever through, and you’re good to go. I have carabiners floating around my house all over the place, but if you don’t, a dollar store or camping section of your local department store should have them available. If you use a roll of dollar store duct tape and a dollar store carabiner, you’re looking at a far less than $2 project.

That’s it. For real.

The bonus I find to this method over the pre-made ones, where a loop generally goes over the top, is that you can customize these to your inhalers. For example, I can’t put an Aero-to-Go on an inhaler with a Propeller sensor attached. Since there are many different sizes and shapes of inhalers, even just slightly, you’ll get a “custom fit” from using tape. It’s a nice quick workaround for those times you don’t have pockets!

How do you carry your inhalers? Do you think you’ll try something like this clip?

**Disclosure: A few years ago, Trudell Medical, the Canadian distributors of AeroChamber, sent me a box of free stuff, including a dozen-ish Aero-to-Go clips. This is just one of those weird things that happened in my life and likely has no bearing on this post given I did not even have this item with me, but should obviously be disclosed.

Health Union is not affiliated with Trudell Medical or it's products.

Silent Asthma: What You Need to Know

Using a Neti Pot for Asthma and Allergies

2 comments
This article represents the opinions, thoughts, and experiences of the author; none of this content has been paid for by any advertiser. The Asthma.net team does not recommend or endorse any products or treatments discussed herein. Learn more about how we maintain editorial integrity here.