Three weeks after coming home from Ottawa for World Asthma Day, I met my Member of Parliament (MP) in the constituency office to talk about asthma, access to care (specific to a community hospital emergency room slated for closure), and access to medication (and some other, less intentional, provincial and federal politics!). After being on Parliament Hill, I was much more excited to meet my representative at the national level in person (but maybe I’m just a nerd). And yes, I recommend doing this!

Considerations for this article

As a Canadian, I’m going to use the term Member of Parliament or MP throughout this post, however, whatever you call your elected official or representative (MP, Member of Congress, etc.), the point is the same: they were elected to serve you. They may not share your political affiliation or ideals, but as a constituent in their community, they represent you, even if you didn’t vote for them!

Many issues will be approached differently between political parties, but, the issues themselves are very often non-partisan (not affiliated with a particular party). When it comes to healthcare, as my friend Tina said about the AHCA vote, “It’s not a partisan issue, it’s a humanity issue.” This could not be more true—which makes everyone have an opinion, and also makes it hard to sort out how healthcare should work—and that’s even in a country like Canada with a (primarily) publicly funded healthcare system.1

Why should you meet with your representatives? 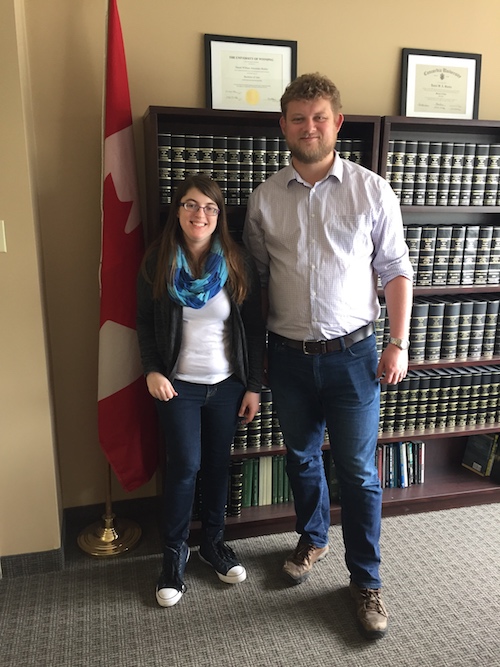 Above: Myself and Daniel Blaikie - Member of Parliament (New Democratic Party)

How do you meet with a representative?

If you’re interested more in the conversation my MP and I had, skip to the next section.

Make an appointment with their office

Unlike meeting Parliamentarians on the Hill, meetings in the constituency (AKA local, near their/your home) office may be a bit more approachable feeling. Still, these appointments can take weeks or even months to make—since I met with Mr. Blaikie’s staff in Ottawa, I got an appointment fairly quickly.

At Parliament Hill, I required photo ID every time I entered a new building and went through airport-style security. In the constituency office, I took an elevator up to the second floor and said “Hi, I’m Kerri MacKay, I have a meeting with Mr. Blaikie at 11.” No ID required, no Parliamentary Protective Service officers, no bag x-ray. This may vary depending on who you’re meeting, as well as when and where.

I did, however, require an appointment (which is super important, especially so that your representative can prepare for your meeting). This may vary based on where your representative’s office is located.
Arriving early is a good idea—and even better if you get in early, too, like I did today!

Meeting my member of Parliament

I went into my meeting prepared, and researched where the party Mr. Blaikie is affiliated with (the New Democratic Party, or NDP) stood on the core issues we would be discussing. I was fortunate that this was an easy meeting: the NDP are proponents of both clean energy/air and a national Pharmacare strategy (for pharmaceutical coverage). I was also able to walk in and thank him for the work he’s doing to keep local community emergency rooms open, which always starts things on a high note.

We discussed the importance of pharmaceutical drug coverage, the number of medications I take for asthma (and ADHD), and having choice in those medications because they work differently for all of us—and for me, how, at least presently, Pharmacare in Manitoba works well for me, but in coming years, affording the deductible will become a greater financial burden.

Less a topic of discussion was clean air—as I am fortunate to enjoy clean air in Manitoba, as our province is powered by hydro (water) and wind, as Mr. Blaikie informed me, our last coal plant is no longer producing energy—it, until 2019, remains operational as an emergency energy source.2,3

I was fortunate that Mr. Blaikie was able to spend a generous amount of time speaking with me. I expected a half-hour or so meeting, and instead, I enjoyed an hour-long meeting discussing the issues I came to discuss (easier as we were on the same page), chatting both provincial and national politics a bit, and even sharing a few good laughs. (Yep, you read that right!)

The do's and do nots

A key thing I learned in our advocacy training is this: go in, tell your story, and explain what issues you have experienced - however...

WE know (even if a certain President doesn’t) that policy, government, and health is COMPLICATED. The government is full of policy people - and guess what, if their policy sucks, they don’t get re-elected. So, tell them the issues, and let the policy people with the understanding of the nuances of government figure it out. Tell them what YOU need, but not how to do their job!

Do have a plan

Have notes available for yourself with facts, statistics and research notes, and something to write notes with. Ensure you go in with a plan—many times, you’ll only have 20 to 30 minutes with a representative or their staff (I got super lucky!). For this meeting, I also brought down the statistics to the local level—doing the math, about 70,000 people in my city live with asthma; he came back with “That’s 10%”.

He was probably then mentally calculating about how many of his constituents have asthma. Hopefully numbers stick!

Don’t get hung up on politics

If you’re meeting a representative that is not of your preferred party, don’t get hung up on the politics. Maybe not the best strategy in general, but based on how our discussion was going, I openly acknowledged that while I hadn’t voted for Mr. Blaikie, I was thankful that he won when the candidate I voted for was way out in left field as the votes poured in!

He laughed as I recounted my reaction to the electoral map (we were on the same side at that point—I was happy the NDP pulled ahead), and said he hoped that more people like me would vote their way next time. And of course, I think it says a lot of people of different political leanings are willing to engage in an open conversation—it's how we grow. As Mr. Blaikie told me, he likes to share the facts, the rationale for both sides, and then explain why he leans the way he does. I think that’s a really good strategy in general.

Final thoughts on meeting my representative

After being on Parliament Hill, I had a much more positive outlook going into my meeting with Mr. Blaikie. The reality is, you don’t know if you have an advocate in your representative until you meet with them, and they don’t know your story and what is important to you, until they meet you!

And, have fun with it if you can! It’s more likely to make you memorable among all the papers and policy.

Oh, he also said more people should run for office.

I’m not sure if that was a hint or not, but I’m not sure that’ll be happening anytime soon ;).

Choosing A Pillow When You Have Asthma

15 comments
This article represents the opinions, thoughts, and experiences of the author; none of this content has been paid for by any advertiser. The Asthma.net team does not recommend or endorse any products or treatments discussed herein. Learn more about how we maintain editorial integrity here.

Have you ever gotten "moon face" as a side effect of prednisone?