Olympic Medals? Athletes With Asthma Are Among The Top Recipients

Further reason to not let asthma sideline you from goals to reach the peak of performance in your sport, or to keep anybody from participating in sport or physical activity—competitively or non-competitively. The World Anti-Doping Agency, who is in charge of ensuring sport is fair, clean, and safe by testing athletes for banned substances in competition and dealing with Therapeutic Use Exemptions (which is how they gather the data regarding which athletes are diagnosed with asthma and take medications learn more anti-doping protocols for athletes with asthma), recently shared some interesting data: athletes with asthma have “consistently outperformed” athletes without asthma, and have earned a higher number of Olympic medals.1

With the Olympic and Paralympic Games recently concluded, I read this and immediately thought Suck it, asthma! Not only can people with asthma be strong competitors—the strongest competitors—we now have an interesting set of data as more solid proof of this fact. 2016 research by  Ken Fitch2, includes this graph that I found interesting, comparing the percentage of athletes with asthma at the Sydney 2000 (Summer), Salt Lake City 2002 (Winter), Athens 2004 (Summer), Torino 2006 (Winter) and Vancouver 2010 (Winter) Olympic Games, and the percentage of overall medals won. In the case of Winter sport competition specifically, a higher proportion among the group of athletes with asthma were medalists. Note, of course, that this applies for individual rather than team sports. 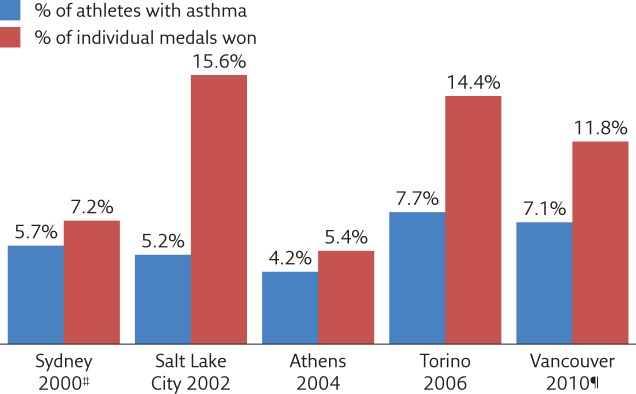 It is also interesting to note that most of the medals attained by athletes with asthma were earned in endurance sports, rather than those considered “sedentary” sports (which are explained in the article as sports like boxing, wrestling and shooting that require strength or accuracy, but are not as demanding on the cardiorespiratory system2—I would also add archery or lawn bowling to this list, for examples), despite endurance sports being, without question, more difficult to train for and compete in for athletes with asthma and exercise induced asthma. This data was based on an application to use inhaled beta-agonist (rescue inhalers, albuterol/salbutamol) in competition, thus, little else can be inferred from this data.2

If you are already an athlete and then are diagnosed with asthma later in life, you’re not alone either—asthma does not have to curb down a successful competitive sport career in most cases. Fitch’s research reports that World Anti Doping Agency data demonstrates that a higher proportion of individuals applying for therapeutic use of asthma meds was developing among athletes older than age 25—in most sports, elite competition will begin much sooner than age 25—than individuals who had been diagnosed with asthma younger than 25 years.2

No matter where you are in your athletic career—professional or amateur, elite or just starting—an asthma diagnosis doesn’t have to prevent you from reaching your goals. And, as data shows, asthma is simply not a massive obstacle to a person’s ability to reach peak performance1 —we are not “overly disadvantaged by [our] medical condition”, and with the help of the right treatment, can be among the top competitors in the top athletic competitions.

Asthma Self-Management Skills: Why Do I Need to Learn Them?

The Asthma Support Checklist For Loved Ones

Do you get muscle cramps caused by your asthma medicine?