On the Move: Neighborhood "Walkability" and Asthma Risk

Recently, my aunt was looking to purchase a new home. Some real estate sites featured this thing called a “Walk Score”, comprised of the “walkability" from the home to nearby necessities and luxuries, broken down into the categories of drinking and dining, groceries, shopping, errands, culture and entertainment, schools and parks.
Here’s the Walk Score for my house: thank goodness for those parks, I guess! 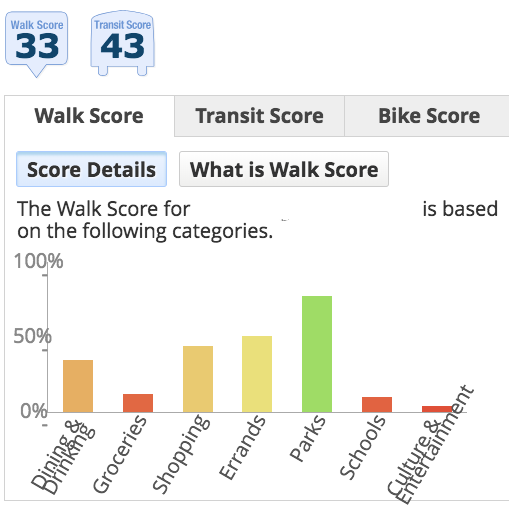 If these things are located within a 5 minute walk from the home, they receive maximum points, and decrease in points with none allotted after a maximum walk-time of 30 minutes (ie. clearly there are few cultural/entertainment opportunities in my area! And, this explains why I only rarely walked home from school). Based on Walk Score, I live in a Car Dependent area—which makes it a good thing i live with my parents, because I don’t drive.
You can calculate your own Walk Score here.

Research presented at this year’s American Thoracic Society (ATS) conference might make this Walk Score even more valuable: children who live in less walkable neighbourhoods are morel likely to develop asthma, and have asthma persist through later childhood. 1

The neighbourhood walkability of children with asthma living in Toronto was assessed, and compared to rates of asthma and asthma-related hospitalization in this study. 1 Above, we called what the study calls “low walkability" the Walk Score—in this study, walkability was measured via a Toronto-developed Walkability Index from 2012 2. The Walkability Index “was composed of population density, dwelling density, availability of retail stores and services within a 10 minute walking distance, and street connectivity.” 2
There are many factors at play with how neighbourhood walkability may affect asthma. You’ll already note a few key differences in these two walkability scores. Namely, the Toronto scale has a longer acceptable walk time, thus a further tolerance for geography. However, with regard to asthma, dwelling density specifically may have additional bearing on asthma prevalence in children, given those who live in low-income or high-density housing often have higher risk of asthma due to environmental issues like mold and cigarette smoke 3 One may also infer that low-walkable neighbourhoods would have a greater proportion of people reliant on single-family vehicles rather than public transit, and thus, greater levels of outdoor air pollution. 3

Based on what we know about housing and asthma, it may be possible to correlate higher walkability scores with more physically active communities. Low-walkable areas could be predicted to be linked to higher rates of obesity due to lower activity levels, car reliance, and decreased opportunities to purchase healthy food proximal to the home. If low-walkable areas happen to be home to children who are at higher asthma-related risk, this can be a “double whammy” correlated with research suggesting children with untreated asthma are generally less physically fit and have a higher frequency of obesity and body fat percentile than peers without asthma. 4Frequently, obesity worsens asthma, makes it harder to control, and may actually cause asthma. 5

These factors, combined with housing, air pollution, and others, make the findings unsurprising that decreased physical activity in low-walkable areas in Toronto is linked with greater risk of childhood asthma. 1

The authors note that placing “services such as grocery stores within residential neighbourhoods and adding pedestrian paths between roads to improve street connectivity” can create more walkable communities. 6 Other ways to make communities more walkable include a mix of affordable residences, parks, public space, and businesses—“mixed income, mixed use”, design oriented to pedestrians (doors at the front, parking at the back), shared road space for pedestrians, cyclists and transit, walkable schools and workplaces, enough people for transit to thrive, a frequent public transportation system, and a “walkable centre” that brings a community together such as a main street or public space. 7

Hopefully, research can soon look at the benefits of walkable communities on asthma, rather than the other way around!

Do you live in a walkable community? How do you think it affects your asthma?

The Effects of Coffee on Asthma

What is the main reason you visit Asthma.net?