As I only work a handful of hours a week on the university campus, I sometimes use my office there to get writing done before I move on to my actual university job. Wednesday morning was one of those mornings—write for an hour or two, work, board meeting semi-nearby. I grabbed an iced latte from Starbucks a building over, told our office administrator I was in-but-not-in (but if anyone asked for me they were free to knock!) and settled in for some writing.

Eventually, as I was flaring-but-didn’t-yet-realize-it, my lungs started to bug me and I decided some Ventolin may help. I was in no way in any sort of trouble, but my asthma was starting to annoy me. I unzipped the front pocket of my backpack—there was no inhaler, but I didn’t actually think it was there, anyways, it was in my jacket pocket. I got up and checked my jacket pockets—no inhaler. I repeated the sequence. I don’t know why I checked my jacket again—magic, perhaps? You will be unsurprised to read there was again no inhaler.

Getting help from a friend

I wracked my brain. While I am sure there were at least several inhalers floating around with people on campus (a lower number than normal since the students are not about in mid-December!), I am aware of exactly zero of them. I texted my friend Russ that I really needed a radar for these things, and he said if he was still working at the mall two blocks from the university like he used to, I could’ve used his.

Heck, I considered using Twitter for the purpose of finding a few puffs of Ventolin, but I didn’t want to freak people out! I also considered going home, but I wasn’t feeling bad enough that it seemed necessary to bus back home and then back downtown for my meeting.

I considered calling the pharmacy at that mall and having them transfer the prescription over from my “home” pharmacy (which Russ also mentioned), but that seemed ridiculous given I have three Ventolins at home! And I didn’t even want to touch the pharmacy delivery method I had to use a few years ago!

Fortunately, before all these contemplations, I had texted (and called, multiple times) my mom, who was at that point ignoring her phone because she was at a curling Christmas lunch, living that retirement life.

“Hello,” I said, “hate to ask you this but is it possible for you to bring me an inhaler? (The blue kind.) I am not dying (clearly) but I don’t have one with me and I sort of need one.”

She informed me she was still at her lunch but would be home around 2 and would touch base with me then. I told her where to find my inhaler and, non-specifically, that it was blue. “Lighter blue. Likely has a cap on it unlike the other blue one that won’t.” 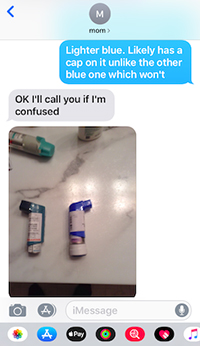 My mom called me as she approached the university and I headed down three floors to where she was meeting me. I appeared at her window, where she’d pulled over to wait right outside the door, which she rolled down to hand me my inhaler. I thanked her, though I can’t remember what else I said although I did feel bad for making her come all the way downtown because of a stupid inhaler! She just said “Better to drive here now than have to pick you up from the hospital later!”

I took a couple puffs in the empty stairwell en route back to my office, snapping a photo of my inhaler (which I texted to Dia, aware of my plight) just after 2:30. 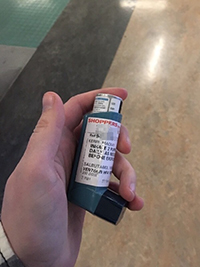 I hate when asthma disrupts my plans, but I hate even more when it disrupts someone else’s. While I rarely forget my inhaler at home, it’s certainly annoying when it does happen—and needless to say, even more annoying when I actually need it! Thankfully, I’ve never had any significant consequences arise, but I don’t like living that close to the edge! This is only the second time I’ve needed my mom to bring it to me (and the other time she was coming to get me anyways), a pretty amazing feat considering I also have ADHD and how often I forget my keys due to that! Either way, it’s extremely frustrating when it does happen

However, situations like these remind me of how lucky I am to have people who help me, whether it’s my mom bringing me an inhaler, having Russ and Dia brainstorming solutions with me, my coworker who asks questions to understand more—and when people do these things happily, it makes things so much easier, and I am thankful for them!

An Asthma Journal & Why You Need One

Say What? 10 Things I’d Rather Not Hear About Having Asthma