The Truth About Medication Expiration Dates

A few months ago, I pulled a new inhaler out of the pharmacy bag to find this sticker (pictured to the right). 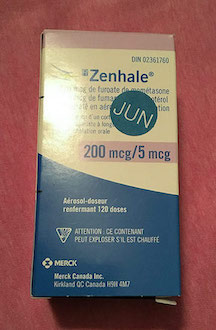 It says “JUN.” As in, short for June. (Which is not even that much shorter.) As discussed in “May Experience: Random Warning Stickers“, I am unsure if this sticker is for my benefit as a patient, or for the benefit of pharmacy staff to move this inhaler off the shelf quicker given its within-six-months “expiration date“. Or to give it to someone, like me, who will definitely use its 120 doses within 40 or fewer days of its receipt. Before its industry-set “expiration date”.

Since early on in my asthma journey, I’ve taken “expiration dates” with a grain of salt. (I mean, really, I do this with most things that aren’t milk.) The fact that “expiration dates” is in quotes is possibly and/or probably by influence of a friend who’s had asthma for 60 years and has been on basically all the inhalers in existence-who legitimately asks people to send him expired rescue inhalers if they won’t use them because he needs so much of the drug and it’s expensive in the US.

I’ve similarly become lax on the expiration dates. Most inhalers, he told me, retain their potency for at least a year post “expiration”. While probably slightly more evidence-based than the “lather, rinse, repeat” on a shampoo bottle, which Ethan Craft from the ’00s era Disney show Lizzie McGuire says it’s just so the shampoo companies sell more shampoo (7:17 here ;)), look, I do totally think that at least a little of it could be because “expiry” means “no longer good” and could maybe sell more inhalers. After all, I did discover the Costco-sized Ibuprofen in the cupboard was like, several years “expired” after using it for those several years. And continued to use it.

So, I’ve been known to use things that are a bit-or more than a bit-“old”. And, from what I’ve noticed (given I am using things usually but not aways within a year of their “expiration date”, I haven’t had anything that didn’t really work as it should. (And while my doctor tells me not to put my meds in the cargo hold of an airplane as the temperature change could affect the potency, I’ve also never really had that cause any problems either. So due to my laissez-faire attitude toward such storage instructions, I may not be the person whose advice you want to take ;).

Again: exploration (or confession?), but not advice. However, if you’ve got an old inhaler or no inhaler, go with the old one every time. It may not be as potent, but it should still work some.

Of course, the “expiry dates” are on there for some reason, presumably attributed to some sort of science-based decision by some regulatory authority (FDA, Health Canada, etc.) or other based on actual science. So what do we actually know that’s not just me speculating money-making schemes? (Which, C’mon, has to be partly right!)

An article from Harvard Medical School notes that these “expiration dates” on medications may be extremely conservative, as in order to bring new products to market they must determine the longest the medication retains its potency. 1 As a ’70s era rule dictates a date must be labeled on all medications, and the company is not going to delay releasing a drug too long, the “expiration date” is the longest they were able to house the drug at full potency before releasing it to market. 1 Beyond that time, it is a mystery how time impacts the potency of a drug. (And of course, that requires you follow the storage instructions to a T!)

So, turns out, I was partly right after all ;).

Do you use medications past their expiration date or do you get rid of them right away? (C’mon, I’ve confessed, now it’s your turn!)

Register to be part of our community today!