My Road to Asthma 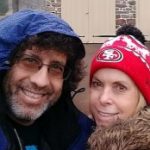 Now that I look back at my childhood, I believe that’s where damage began. My father was a chain smoker; I can’t think of a time when he didn’t have a lit cigarette in his hand or a cigarette wasn’t burning in an ashtray. In the winter, our house was closed up and we kids were constantly sick with upper respiratory illnesses. I can’t count the number of times I had bronchitis as a kid, let alone the colds. The walls inside our home were yellowed from nicotine, and that’s the stuff we were breathing into our lungs. My father’s fingers were stained as well, and by the time he turned forty years old, his teeth were so damaged from smoking that he needed dentures. He died at the age of sixty-three from lung cancer.

Fast forward a few years and as a teacher, I continued getting upper respiratory illnesses right and left, which I attributed to not being used to so many “cooties” I was exposed to from my students. Then I contracted pneumonia the first time, then a second, and a third. It was severe enough that I was hospitalized a week each time and needed a week at home after the hospitalizations because I was so weak. I would be asked by hospital staff if I was a smoker or had been one. NO! I would emphatically exclaim. Each time my lungs were so full of gunk, they would have to percuss my back to help loosen the phlegm along with the breathing treatments and antibiotics. I would be tested for asthma, but I didn’t have it at that point.

A few years ago, I went to my GP because I was wheezing sometimes, mostly in the mornings right after I got up. He referred me to an asthma/allergy specialist, and after some testing, I was diagnosed with allergic asthma. My only allergen seems to be cat dander; I’ve had animals for most of my life, we’ve had cats for almost our whole marriage, and I wasn’t willing to get rid of our “kids.” At first, I was on all kinds of medications, but I was able to wean myself off most of them. Now I’m on a inhaler once a day in the morning, a nasal spray, and eye drops. I continue to have problems with eye irritation; I kind of look like I smoke weed sometimes, which my students think is hilarious, so I continue to look for eye drops that are effective for me. I feel fortunate that after some trial-and-error, we got medication that works well for me, and I very rarely need my rescue inhaler. Actually, I sometimes go years without needing it, and I’m very grateful for that.